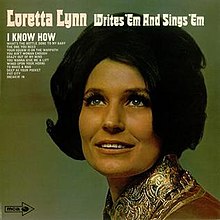 Loretta Lynn Writes 'Em and Sings 'Em was the first album released where every song was either written or co-written by Loretta, "You Wanna Give Me a Lift" being the co-written with her sister, Peggy Sue Wells. Reaching No. 8 in the charts, this record was the continuing saga of a strong-willed woman committed to a male-defined world.
Powered by Lapero