Skip to content
facebook
twitter
instagram
youtube
Make A Reservation
News
NASHVILLE, Tenn. – The iconic Grand Ole Opry House stage was home to a night of heartfelt tributes and uplifting moments on Monday, September 13, as some of Music City’s finest came together to support flood relief efforts spearheaded by Country music icon Loretta Lynn. With Loretta Lynn’s Friends: Hometown Rising. Total funds raised are being tallied now, with 100% of proceeds directly supporting United Way of Humphreys County and the citizens impacted by the devastating floods that rushed through the area on August 21, claiming the lives of 20 people and destroying hundreds of homes.

Reigning CMA Male Vocalist of the Year Luke Combs kicked off the evening with uplifting performances of “Forever After All” and “Beer Never Broke My Heart,” noting, “I live in midwestern Tennessee myself… and I started seeing all the devastation that happened out where I live. When I got the call from Loretta, I said ‘whatever I need to do, I’m there. I want to help.’ So thank you all for being here tonight.”

Three-time GRAMMY Award winners Little Big Town followed suit, keeping the energy climbing with their hits “Wine, Beer, Whiskey” and “Boondocks” while the incomparable Reba McEntire shared a touching performance of “I’m A Survivor” pausing to reflect on the emotion of the evening before bringing fans to their feet with her beloved hit “Fancy.”

“Thank y’all so much for being here tonight,” said McEntire. “It means the world to Loretta and all the folks west of town. I hope we don’t ever have to go through this again. I hope the next time we gather like this it’s for a fun, joyous time. But let’s make it a fun, joyous time and celebrate the ones who are surviving, send the ones on home that have left us, and we’ll continue on with good country music and families and friends and neighbors joining together to help each other.”

While giving the impacted families of Humphreys County in the audience at the Opry House a musical respite from the heavy moments of the past few weeks, the evening hosted by SiriusXM’s Storme Warren and Apple Music’s Nada also paid tribute to the tragedy they endured with a series of meaningful packages throughout the programing; spotlighting the memory of those lost as well as the resiliency of the community and the ongoing needs that funds raised tonight will support.

“This situation compares to nothing like we’ve ever been through before,” noted Humphreys County Sheriff Chris Davis during an emotional look at the devastation and tribute to the lives lost. “We’ve still got a long way to go. It’s gonna take everything that we can put together to keep moving forward. When tragedy or something happens and the rubber meets the road, our people come out. We had a lot of agencies come in; it didn’t matter what patch you wore, what badge you wore, everybody found a place and helped. You start hearing the stories of the people that you’re around every day, and to see the overwhelming love and support that came out, was amazing – truly amazing.”

Another particularly touching moment of the evening took place during the next performance as reigning ACM Entertainer of the Year Luke Bryan paused after his No. 1 hit “Most People Are Good” to introduce sentimental song “Drink A Beer,” noting “I tell people all the time, ‘I’m a Georgia boy but Tennessee is my home.” He became choked up while sharing his own firsthand experience visiting the Humphreys County town of Waverly in the days following the flood, declaring, “we won’t forget you Waverly. Let’s make sure we fix it just like it was; a beautiful small town in Tennessee.”

Chris Janson then shared his own emotional ties to Humphreys County – reflecting on the Sheriff’s comments and noting “” – before brining his trademark energy to the Opry House with a rousing rendition of his No. 1 hit, “Good Vibes.”

Spotify’s “Hot Country Artist to Watch” Brittney Spencer then paid tribute to the event’s namesake herself with a vivacious take on “You Ain’t Woman Enough (To Take My Man)” followed by her original song “Compassion,” dedicating the performance to a Humphreys County survivor she met earlier in the evening and summarizing the night perfectly as she sang, “Trynna make the world a better place / It’s usually just a helping hand / An open mind, the will to stand.” 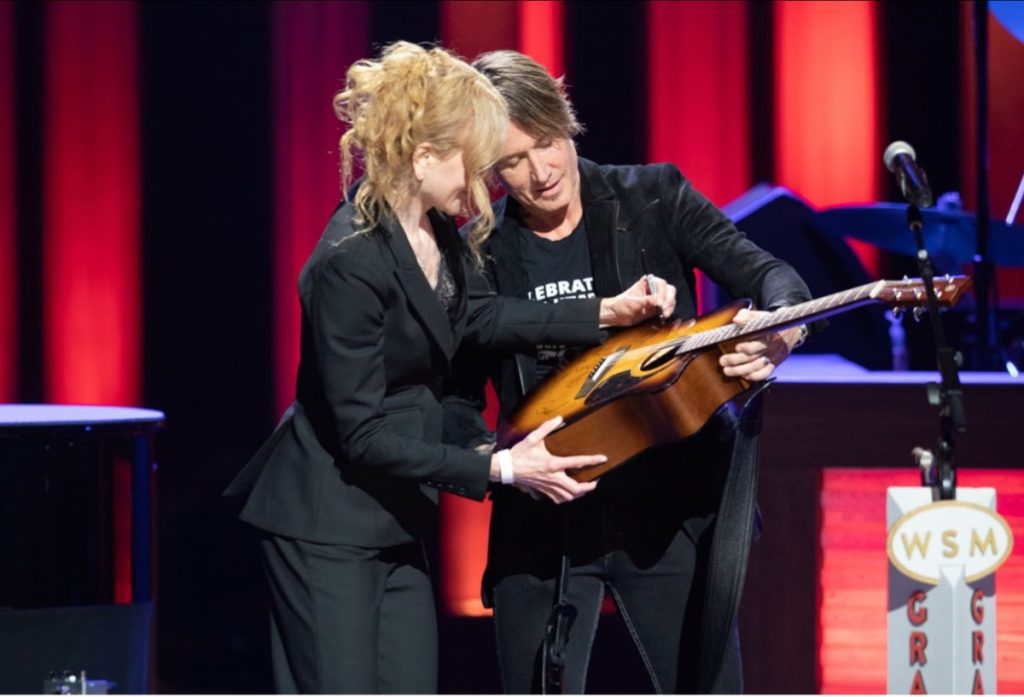 Making his debut on the Opry stage, BRELAND followed suit with his reflective single “Cross Country,” followed by international superstar Keith Urban taking the stage and encouraging fans to sing along with two of his many hits accompanied only by his own famed guitar skills; “Wasted Time” and “Blue Ain’t Your Color.”

Urban then paused as he removed his guitar strap and reached for a Sharpie, noting, “this is the volunteer state, so I want to do my bit and sign this guitar” as he brought his wife, Nicole Kidman, to the stage to add her autograph as well as BRELAND for his own before the two led the house in an all-sing of the Bill Withers classic, “Lean On Me.”

The spontaneous guitar donation was then auctioned off during the following commercial break, joining two autographed show posters that garnered $20,000 in a live auction earlier in the night. As bidding peaked at $36,000, the next artist due on stage made an early appearance to increase the leading bid, with seven-time CMA Entertainer of the Year Garth Brooks declaring, “let’s double it; $75,000!”

The night concluded with a grand finale as Brooks returned to the stage with Trisha Yearwood for a medley of famous duets, from Lynn’s own classic with Conway Twitty, “After the Fire is Gone” to Tammy Wynette and George Jones’ “Golden Ring” and the GRAMMY Award-winning couple’s own “Whiskey to Wine.” Brooks then stepped back to accompany Yearwood on guitar as she performed her classic hit, “She’s In Love With the Boy” before the night ended with the crowd on their feet singing every word to “Friends In Low Places.”

Echoing the words of Urban, Brooks capped off the night with a call to action for the audience in the Opry House and watching at home, proclaiming, “they call it the volunteer state! Thank you for all your help, all your love, all your prayers. It’s going to take all of us, people!”

In addition to the artists on stage at the Grand Ole Opry House, the program also featured recorded appearances from several other Country stars, as Tracy Lawrence, Carly Pearce, Thomas Rhett, Kid Rock, Darius Rucker and Carrie Underwood called on fans to support the important recovery work being done by United Way of Humphreys County. Several major donations were also announced during the evening, with City National Bank and Lawrence’s “Mission Possible” charity both contributing and the Academy of Country Music matching $25,000 of fan donations in honor of Lynn being named one of this year’s ACM Poet’s Award recipients at the recent ACM Honors.

In an effort to continue fundraising throughout the coming weeks, Lynn has also partnered with Kendra Scott to garner additional support for the cause, with the jewelry company donating 50% of proceeds from the sale of their Tennessee Guitar charm throughout the month of September to United Way of Humphreys County. The charm is available for purchase at KendraScott.com or in retail locations.

Commemorative show posters from the evening are also available for purchase HERE.

To donate to the ongoing recovery efforts, please click here or text TNFLOODRELIEF to 44321. For more information, visit UnitedWayHumphreys.org.