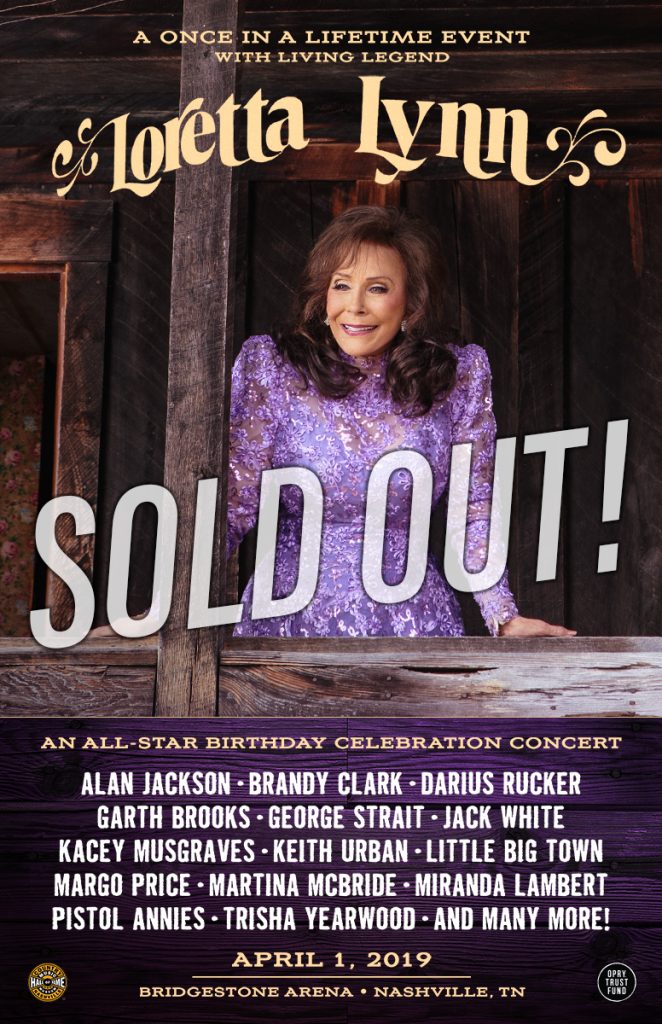 Tickets On-Sale Friday, January 18 at 10 a.m. CT www.bridgestonearena.com Music icon Loretta Lynn will celebrate her birthday this April with a once-in-a-lifetime music event. On the heels of one of the most deeply personal albums of her career, Wouldn’t It Be Great (Legacy Recordings/Sony Music Entertainment), the 2019 GRAMMY nominee celebrates this year’s birthday is being honored by her friends. Alan Jackson, Brandy Clark, Darius Rucker, Garth Brooks, George Strait, Jack White, Kacey Musgraves, Keith Urban, Little Big Town, Margo Price, Martina McBride, Miranda Lambert, Pistol Annies and Trisha Yearwood are among the first guests announced for “Loretta Lynn: An All-Star Birthday Celebration Concert” on Monday, April 1 at Nashville’s Bridgestone Arena, produced by AEG Presents. Acclaimed music producer Dave Cobb will serve as musical director for the evening of celebration and song. Net proceeds from ticket sales benefit the Opry Trust Fund and the Country Music Hall of Fame and Museum. “I am so excited to celebrate my 87th birthday with all my friends,” shares Lynn. “This is the first time I’ve ever had a birthday party! My birthday wish has come true. The only other wish I have is that Keith Urban jumps out of my birthday cake!” Garth Brooks was on hand at the press conference to surprise Lynn with a birthday cake to kick-off the celebration. In describing Lynn’s immense contribution to American music, Brooks said, “She’s the queen of Country music, there’s not a level she hasn’t crushed, no matter how big this party is, it ain’t gonna be big enough! This is going to be an honor and a blast!” Sally Williams, SVP Programming & Artist Relations Opry Entertainment and GM, Grand Ole Opry added, “Loretta’s been warming hearts and putting smiles on faces since she joined the Opry in 1962. There’s no one who deserves a big birthday throwdown more than her. And by generously including the Opry Trust Fund in the festivities, it will be the country music community that will receive the gifts this year as she helps us fulfill the mission of helping those in our community who are in need.” “Country Music Hall of Fame member Loretta Lynn is a beloved and important figure in American music,” said Kyle Young, CEO of the Country Music Hall of Fame and Museum. “Loretta’s gift helps assure the success of our ongoing education mission, as we relate her story and the stories of other vital music-makers to generations of listeners and learners. In our museum, Loretta will always be a precious presence, as the memories and artistry of a coal miner’s daughter continue to inspire.” AEG Presents’ Ali Harnell serves as executive producer of the event noted the significance of the timing, “Producing this event is an absolute pride-filled highlight of my career. I have always looked to Loretta as an inspiration on so many fronts. She is a boundary-pushing, trailblazing, surviving, undeniable superstar and I can’t wait to celebrate her and all her many achievements on April 1 at Bridgestone Arena.” Loretta Lynn has long been established as the undisputed Queen of Country Music, with more than 50 years of recording and touring to her name. A self-taught guitarist and songwriter, Lynn was one of the most distinctive performers in Nashville in the 1960s and 1970s. She shook up Nashville by writing her own songs, many of which tackled boundary-pushing topics drawn from her own life experiences as a wife and mother. “Coal Miner’s Daughter,” “Fist City” and “Don’t Come Home A’ Drinkin’ (With Lovin’ on Your Mind)” are just three of her 16 country No. 1 singles. Lynn is also one of the most awarded musicians of all time. She has been inducted into more music Halls of Fame than any female recording artist, including The Country Music Hall of Fame and the Songwriters Hall of Fame, and was the first woman to be named the Country Music Association’s Entertainer of the Year in 1972. Lynn received Kennedy Center Honors in 2003 and a Presidential Medal of Freedom in 2013. In 2015, she was named recipient of Billboard’s inaugural Women in Music “Legend” Award. Lynn has won four GRAMMY Awards (including a GRAMMY Lifetime Achievement Award in 2010) and sold more than 45 million records worldwide. Tickets to “Loretta Lynn: All-Star Birthday Celebration Concert” go on sale Friday, January 18 at 10:00 a.m. (central) with prices ranging from $29.50 to $149.50 (plus applicable fees) and limited VIP packages available. To purchase tickets, visit BridgestoneArena.com.
Powered by Lapero